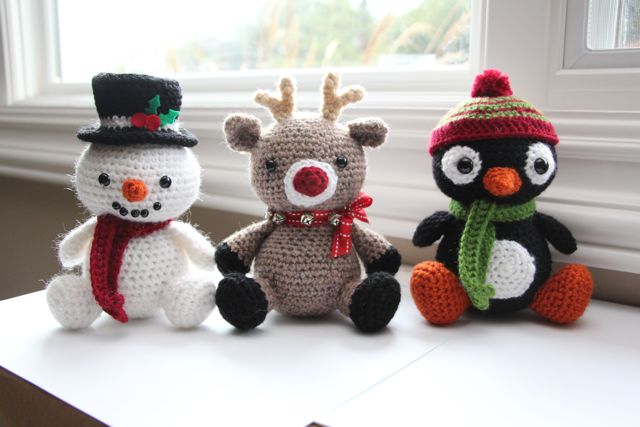 Jolly the Snowman, Jingles the Reindeer, Pepe the Penguin

Presenting my 2012 holiday collection!  Jolly the Snowman, Jingles the Reindeer, and Pepe the Penguin!  These little guys all  sit at about 7″ high.  Little Jolly was the first creation..I just love cute little snowmen, so he was a no-brainer for me to make.  Jingles came next.  Originally named “Rudy,” he was a bit more of a challenge.  I wasn’t quite sure how to make his antlers, but with some experimenting, I think it came out alright.  I had a bag of jingle bells that I had bought maybe 3 years ago that I have never opened!   I am thrilled to finally put them to use!  The ribbon around the neck is also something that I saved from a previous Christmas present.  I had been holding onto for a few years now.  It’s funny how things come together.  I knew everything would come in handy one day! Anyways, a day before I was ready to post “Rudy,” a great amigurumi designer Josephine Wu (from a Morning Cup of Jo creations) debuted a reindeer with the same name!   What a coincidence! So on the recommendation of a lovely Facebook fan, I ended up selecting “Jingles” and I think the name fits wonderfully for my little guy!

The penguin is my most recent creation.  I wanted another character that reminds me of wintertime and I came up with Pepe.    Other characters I considered but didn’t become reality were an elf and a gingerbread  boy.  Maybe next year, for the 2013 holiday collection!    Pepe was a lot of fun to make.  I toyed with the idea of using a different color for him, something unusual.  I thought of using a light blue, or a purple.. but ultimately I decided to stick with classic black.  I have never made anything using black yarn before.  It makes photographing a little bit harder, because details can be lost in the darkness.  I love how colors just pop against his black body and white eyes.  I didn’t think I could go wrong with any color for his hat and scarf set.  To keep it festive, I chose Christmasy red and green.  I think purple would look great  too!  In general, after I make a doll, I pretty much have no interest in repeating it again…so I don’t think I’ll see how well other color combinations might work.  That’s why I LOVE seeing pictures of other crocheter’s finished dolls from my patterns.  It’s so much fun to see the creativity and liberties that others use to modify my patterns to create their own visions.

These three patterns are available in my Craftsy shop, Etsy shop, and on Amigurumipatterns.net!  Only $3.99 each!  Make your own version today!!

One Response to My Holiday Collection