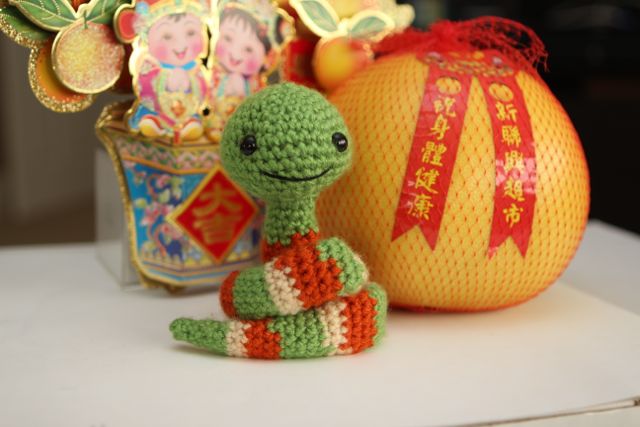 This little snake is really quite simple to make.  He makes a great decoration and a great gift for anyone who either likes snakes or has the zodiac sign of the snake!

His head, you might notice, is the pretty much the same head as Sheldon the turtle!  The placement of the eyes and the added mouth makes the difference.

His body is one long piece and there is minimal sewing required. 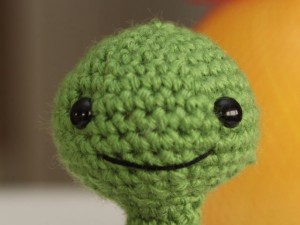 Note the placement of eyes and mouth

Stuff the head with fiber fill and place the eyes and backings at this point. If you wait until later, the opening of the head will be too small to manipulate the eyes well.   Thread your embroidery thread onto your needle and sew the mouth as well,  You will want to tie the ends of the mouth inside the head before the opening gets too small.

Be careful and patient when starting at the tip of the tail! It can be a bit hard to handle because there are so few stitches and everything is so tight together.  Do it slowly and carefully and everything will turn out right!
with green yarn 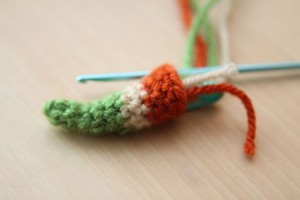 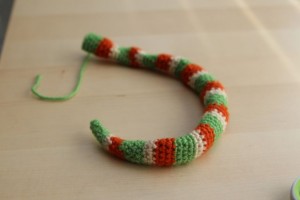 end with 4 rounds of green yarn

The body doesn’t really need to be stuffed.  I started to drop in some polyester pellets but then decided that I didn’t really need them.  So in actuality, my snake is partially filled with pellets but it really doesn’t seem to make much of a difference.  In fact, if the entire body is stuffed, I don’t think it would be possible to coil and twist it the way I have in order to make it stand up.  It’s definitely better to leave it emptier inside. The only part you should stuff is in the neck, where the first green/orange/cream pattern is.  After stuffing the neck with a bit of fiber fill, sew the head onto the body.  Both openings have 10 stitches each, so it should be a seamless transition.  Please refer to my pictures for coiling your snake. 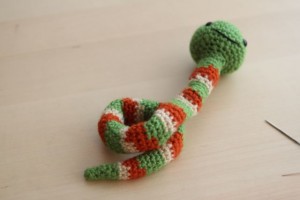 Step 1: Coil the tail end of your snake like this 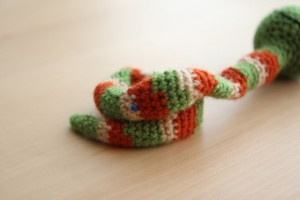 Step 2: Put a pin here to keep the body from unraveling 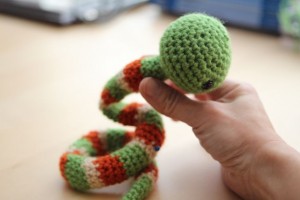 Step 3: Holding your snake’s “neck”, make a bend as shown in the picture. You will be pushing it down into the opening created by the coil you have already made. 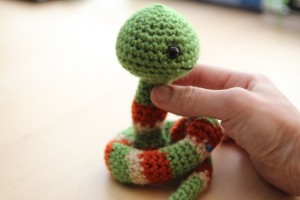 Step 4: Push it down all the way until it hits the table. Your snake should be fairly stable now. 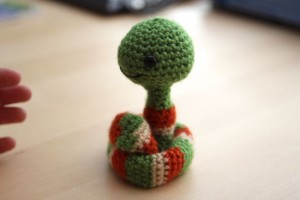 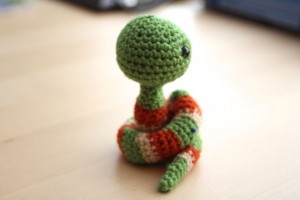 Side view of snake 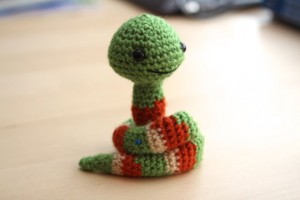 You are basically done with your snake!   The part of the body that was initially pinned together needs to be sewn together.  You can do this discreetly on the inside/underside of the snake.  You may also want to pick one other spot, maybe where the back of the “neck” touches the back coil.  If you reinforce your snake in those two areas, your little doll should be very stable and stand up nicely on its own!

Congratulations! You have finished your own amigurumi snake!  Please feel free to send along pictures of your creation or post on my facebook page (www.facebook.com/littlemugglesworld) for all to enjoy!